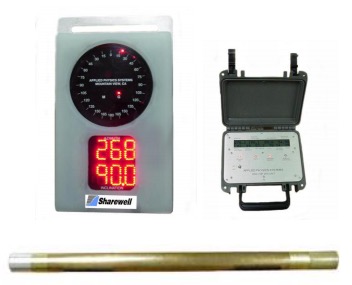 The MGS provides the contractor with known positioning by producing immediate information on tool face, azimuth (horizontal angle) and inclination (vertical angle). This data is processed at the surface by steering software to provide information on depth, course length and distance off a predetermined azimuth.

The MGS system has five main components: A probe, driller’s console, interface unit, computer, and printer. The probe is located in a non-magnetic bottom hole assembly that typically includes a collar, orientation sub and a bent sub with a bit when jetting or a mud motor. Information from the probe is sent up to the surface via a single conductor wireline. The information is processed at the interface unit and simultaneously transmitted to the driller’s console and computer to provide continuous information on the borehole orientation.

Horizontal Directional Drilling Contractors benefit by using Sharewell’s Trutracker® system which is a secondary, independent verification of the boreholes path. Trutracker can be operated at depths in excess of 300 feet and is accurate to +/- 2% of the vertical depth of the probe.